*** If you are reading this because you are expecting triplets – please be warned that although there are likely a lot of great emotional/physical references for you here – you will not find a “happy ending” to our story. If you’re not prepared to read that, do not go beyond 22 weeks here. If you’d like information on how I handled the first trimester with energy and food feel free to use the first trimester link and only read those entries. May God bless you with three healthy babies and if not, may He comfort you through the grief. If you’re looking for references on how we handled the memorial service and grief of our angels feel free to read to the end. ***

I started this blog for a simple reason, to remember what carrying triplets was like and to share updates and photos with family and friends. It’s taken me quite a bit of time to get writing mostly because it’s taken so long to feel up to it (13 weeks). Thanks for reading!

For those of you reading who don’t know me personally, here’s a little bit about me and my family. 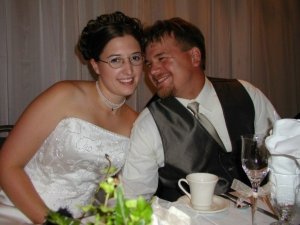 Nate and I (Janelle) met when we were 16 years old. Yep. We go back a long ways. We started dating shortly after my 17th birthday. After a long-distance relationship through our college years (Duluth, MN to Fargo, ND) we were married in the summer of 2003. Although Nate would have jumped at the chance to have children right away, I wasn’t quite ready. I wanted to be financially stable and just have a few years to enjoy our new married life together. Some days I look back and wonder why I couldn’t have been “ready” sooner.

Our attempts to start a family began in 2005. After several months of failed attempts and a very irregular cycle we looked for medical help. Just as we were preparing to start our first Clomid cycle we found out I was pregnant but that there was no heartbeat. Several long weeks later I miscarried during my friend’s wedding rehearsal of all times/places. (We later named this baby Juniper Hope).

We moved on to a new doctor and some simple blood work. In 2007 we completed 1 or 2 Clomid cycles with her. It’s sort of a blur now how that all evolved. With no success there we were referred to a endocrinologist. May, 2007 I was diagnosed with PCOS (polycystic ovarian syndrome). I started Metformin to treat the disorder. Then came the hysterosalpingogram to see if my fallopian tubes were open. They found a blocked right tube. That meant a second “salping” with the endocrinologist and he attempted to open the tube by threading wires through it. No luck. I won’t even explain how awful that was!

August of 2007 we did our first IUI cycle (intrauterine insemination) using Letrozole to stimulate follicles, Ovidrel injection to stimulate ovulation, follicle studies to track follicular growth, number, size and side (knowing I had a blocked tube). My husband gave a “sample” which they washed and spun and then on procedure day it was inserted above my cervix. And – success! Sadly a few weeks later we went for an ultrasound and found nothing. They told us it was a chemical pregnancy and we went home devastated. 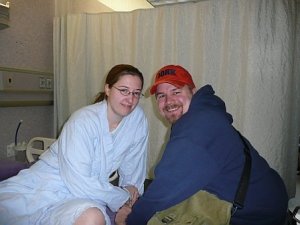 I did HCG labs to confirm the levels were decreasing with the loss – but they weren’t. They were rising. Something was wrong. I went in for an ultrasound and they saw a small bulge in my right tube – the tube that was blocked. Somehow the dominant follicle from our left ovary moved through my body and into the blocked right tube and the baby started growing in the wrong place. An ectopic pregnancy. I was scheduled for emergency surgery for two days later. When the surgeon went to remove the baby I had started to bleed. The tube had ruptured and they were there just in time to save me. This was the first time this doctor would save my life. Needless to say it was one of the hardest days of our lives. (We later named this baby Toby Ezra). 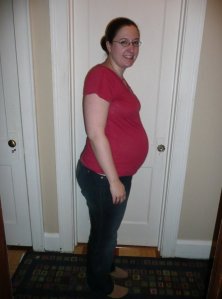 We had to wait a few months while my body healed and began IUI cycles again in January of 2008. We tried and tried but had no success for 7 long months. We had two months of rest in that time. My endocrinologist only allows 6 cycles. So we had one month left to make things happen. July 2008 was it! Success! We held our breath as each week passed and I was blessed with a fairly uneventful pregnancy through the first 35 weeks. I was overjoyed and we excitedly prepared for the birth of our daughter.

March 2009 – everything changed. I started to have strange symptoms. Pain across my upper back, massive swelling (more than I had already experience to that point), flashing lights, triple vision and floaters in my eyes, tingly fingers, very dark urine, nausea, diarrhea, contractions. I went in 5 times and was sent home and told I must have “a bug”. It wasn’t. After fighting my instincts to go in for help again we finally left for the emergency room at 4am on March 16th, 2009. 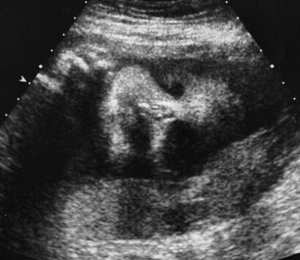 I hadn’t slept more than an hour or two in several days. One lovely nurse saved my life. She finally drew lab work and did a full urine test for protein. Hours later I had nurses preparing me for the delivery of my baby that day. Within 24 hours. 3+ weeks early. Doctors were saying things that we didn’t understand. HELLP syndrome. What was that? We weren’t sure, we just knew that I wasn’t allowed any pain meds and I had to do my best to delivery this baby naturally as fast as possible. I was induced and was in labor from 8am – 10pm. I did my best but the baby was face up and in the process of trying to turn her she got stuck sideways with her head stuck on my pelvic bone. The doctor did everything she could (episiotomy, suction, turning) but nothing worked. I was prepped for an emergency cesarian section. In a matter of minutes I was put under full sedation and my beautiful daughter was born at 10:18 p.m. 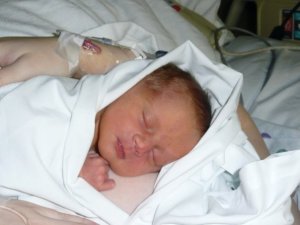 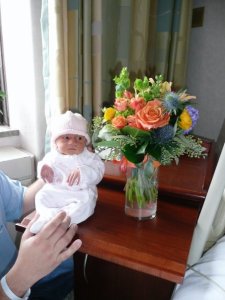 It wasn’t until days later that we realized how serious my condition was. HELLP syndrome (A pre-eclampsia-like condition characterized by Hemolysis, which is the breaking down of red blood cells, Elevated Liver enzymes, and Low Platelet count) nearly took my life. It was me that was in danger – not the baby. We had no idea. I was hospitalized on full bed rest for 5 days. 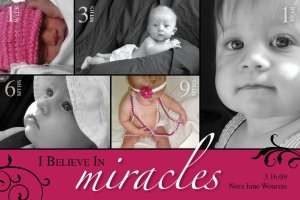 Even during this scary time we were blessed with our beautiful daughter, Nora Jane Wourms. She was itty bitty but strong. She was born 5 lbs 7 oz but struggled with jaundice and eating so dropped to 4 lbs 6 oz within a week and was nearly hospitalized. We pulled in prayers from every direction and eventually we both gained our strength back and figured out how to nurse properly (with a LOT of help from our loving family and friends).

Due to the extreme stress on my body we weren’t allowed to consider more children until I rested for at least a year. So in April of 2010 we began our attempts for more children. We tried on our own for nearly a year. In my heart I believe I had another loss in the fall of that year. We went back for help from our endocrinologist again in January of 2011.

We had several complicated ups and downs in the 9 months that followed – not worth rehashing here – and were preparing our hearts that our family might only be a family of 3. Although we truly wanted more children we were trying to accept this possibility. We had one month left in our IUI cycles again and we were shocked to finally hear that it had worked! Success! We were over the moon – but cautious after all we’d been through.

The initial HCG levels were very high and the nurses had a bit of an exasperated expression when they told us how they increased each week. Something in the back our mind thought maybe there were twins. Both Nate and I have always thought that we’d have twins at some point. In fact we both had these thoughts before we met each other which neither of us can explain. After having one child though it was something that we certainly couldn’t imagine. So much work! 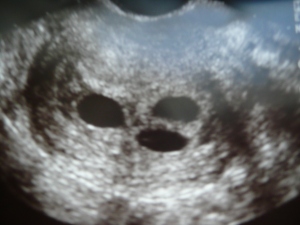 At 6 weeks we went in for our first ultrasound. With the prior ectopic pregnancy in my history they check the placement of the baby very early on. We were overjoyed to see a heartbeat right away when they began the ultrasound. YES! But – then we saw more. Two? The ultrasound technician kept measuring and taking pictures and measuring the heart rate. Over and over and over. Why was she doing this so many times? There must be two! Oh my goodness. TWO? She stopped her measurements and looked up and said, “Well, it looks like there’s THREE!” This is when my first panic attack began.

I’ll leave the rest of this story to the blog itself as we don’t yet know how the rest of the journey will evolve. We pray that God protects us during this journey as He has through every trial of our past.

Update: Since the loss of our precious triplets we’ve been blessed with another miracle baby, Kate Ellen, who was conceived the month after we stopped trying without any medication or medical intervention. What a surprise she was! We were thrilled to welcome her to our family in 2015, ten years after the start of our dreams to build a family. 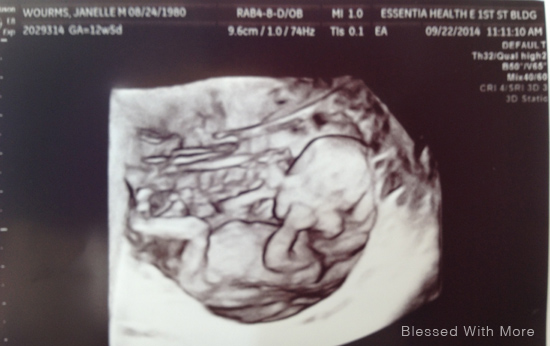 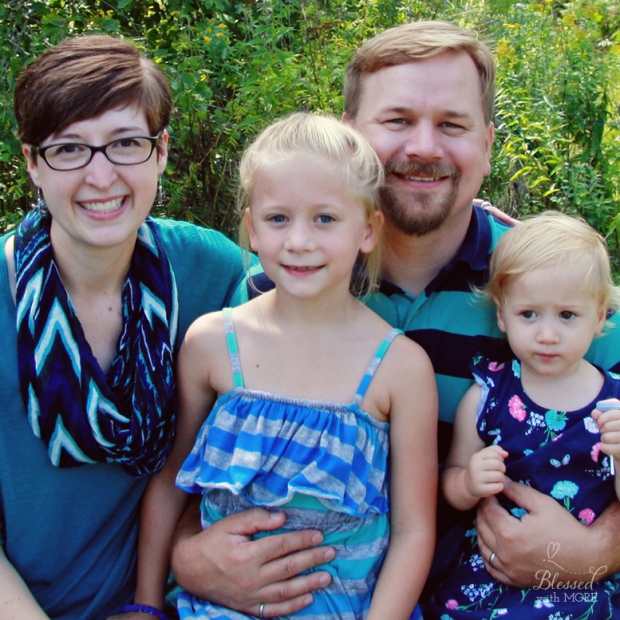 We’ve dedicated this site, Blessed with More, to supporting families facing the loss of a child by providing providing memory boxes, teddy bears, gift bags, blankets, hats and books to area hospitals to bless families who have experienced the devastating loss of baby. Please consider a donation today. Our items can be donated in memory of a child. 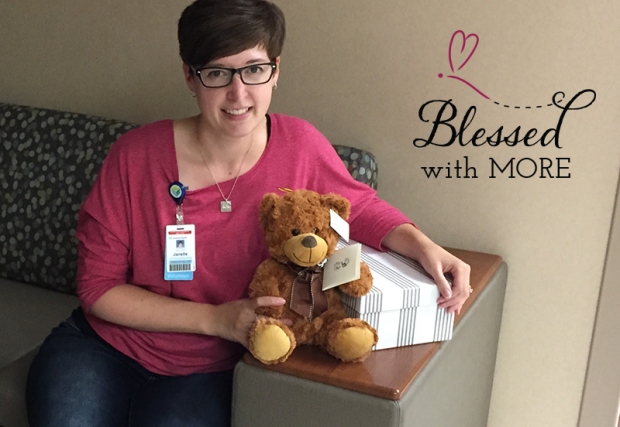 Blessed with More provides memory boxes, teddy bears, gift bags, blankets, hats and books to area hospitals to bless families who have experienced the devastating loss of baby. Please consider a donation today. Our items can be donated in memory of a child..

Janelle & Nathan have two miracle daughters here in their arms – and five angels in Heaven.

Find our journey through infertility and our triplet pregnancy in the "Our Story" link.

Baby Loss Memory Boxes, Bears and Gift Bags: Please consider a donation today.
Our items can be donated in memory of a child.

About Blessed with More

Blessed with More provides memory boxes, bears, bags, blankets and books to area hospitals to bless families who have experienced the devastating loss of baby.
Janelle & Nathan have two miracle daughters here in their arms – and five angels in Heaven.
Find our journey through infertility and our triplet pregnancy in the “Our Story” link.

Please consider a donation today.
Our items can be donated in memory of a child.